Finalists for the 8th annual English Curry Awards 2018 have been announced following a wave of nominations from across the country.

Masala Bay Indian Restaurant, Herne Bay has been shortlisted in the Takeaway of the Year category. Masala Bay will find out if they will be named the winner at the awards ceremony. 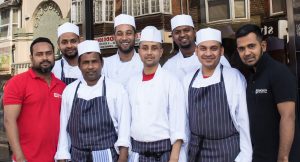 The much-anticipated awards aim to recognize and reward the hard work, determination and dedication of those in the country’s booming curry industry.

“It’s always an honour to be shortlisted for the English Curry Awards. We have had an amazing journey, winning our region in 2013, 2014, 2015 & 2017. Our ultimate target is to win the overall national title.” – Mohammed Rahman, Co-Owner

The lavish, black-tie awards ceremony is due to take place on the 17t h of September at the stunning Copthorne Hotel Merry Hill in Dudley and will include a drinks reception, four-course meal and entertainment as well as the awards ceremony itself.